Libraries are full of resources that can show us other ways of being, living, making, doing. They are essential to our practice as impractical laborers. Please enjoy browsing the virtual stacks of the ILSSA Reference Library, an evolving index of readings & resources contributed by ILSSA members.

In advance of each ILSSA Group Residency, participants are invited to share some of their favorite resources with the group. What tools do they find essential for living, working, making, being?

The Art of Recklessness, Dean Young
I LOVE this book (the subtitle of which is "Poetry and Assertive Force and Contradiction") and am essentially ALWAYS reading it. It is kind of like an artist's statement on steroids. Young writes "Poetry is not a discipline. It is a hunger, a revolt, a drive, a mash note, a fright, a tantrum, a grief, a hoax, a debacle, an application, an affect . . ." This little book just feeds me in a way that I can't really explain, but I think it is one that any "maker" should read.
Local 585 Shop DWYjr David Yockel Jr

Coming Out About Money, Felice Yeskel
I was reminded this spring of this essay thinking about money and class in the context of activism—relevant also for collective artistic work, I reckon. It's from 1992, so some of the ideas may feel a little more central or obvious now than they did then. I continue to find it really helpful. There are two sidebars of note, one called Class Background Indicators, and one a cheat sheet on class background. The PDF is thanks to Bread Uprising, a cooperative bakery a while back in Durham, NC.
Local 919 Shop AB Anna Lena Phillips Bell

Draw it with your Eyes Closed: The Art of the Art Assignment
Local 603 Shop ES Erin Sweeney

Haystack, Stuart Kestenbaum
[His] poems [are gifts]. I also often read from this collection of essays, where he writes about craft and making, and he can be heard reading favorite poems here.
Local 603 Shop ES Erin Sweeney

New Yorker’s Cartoon page
Where artists (particularly Edward Steed currently) beautifully illustrate the absurdity of the modern world and remind me to find humor as we do our best to navigate it.
Local 617 Shop MJ Mari Jaye Blanchard

"Poem," Charles Simic
I actually have a handwritten, signed copy of this hanging above the dresser in my bedroom. I read it EVERY day.
Every morning I forget how it is.
I watch the smoke mount
In great strides above the city.
I belong to no one.

Then, I remember my shoes.
How I have to put them on,
How bending over to tie them up
I will look into the earth.
Local 585 Shop DWYjr David Yockel Jr

Sister Love: The Letters of Audre Lorde and Pat Parker 1974-1989
And below I'll paste in part of a letter from Audre Lorde to Pat Parker, with Lorde's advice on returning to a writing practice, that I have loved recently. From a letter from Audre Lorde to Pat Parker, December 6, 1985:
Things you must beware of right now—
A year seems like a lot of time now at this end—it isn’t. It took me three years to reclaim my full flow. Don’t lose your sense of urgency on the one hand, on the other, don’t be too hard on yourself—or expect too much.
Beware the terror of not producing.
Beware the urge to justify your decision.
Watch out for the kitchen sink and the plumbing and that painting that always needed being done. But remember the body needs to create too.
Beware feeling you’re not good enough to deserve it
Beware feeling you’re too good to need it
Beware all that hatred you’ve stored up inside you, and the locks on your tender places.
Local 919 Shop AB Anna Lena Phillips Bell

The Sun
For me, at this time, every issue is a gift.
Local 603 Shop ES Erin Sweeney

Caroline Woolard
Here is something that's brand new to me: her work and her shared teaching tools, such as this and this, and just the context they exist in for me / if you want to be overwhelmed with more.
Local 914 Shop ND Nike Desis

While the exhibition ILSSA Implement was installed in the VSW Gallery (Rochester, NY), the ILSSA Co-Operators selected the following titles to be stocked in the VSW bookstore as the ILSSA Influences exhibition, contextualized by the following note: "We think of our favorite books as tools for understanding other ways we can be in the world. Here are a few that have been influential in the founding of ILSSA, or have helped us chart course since then."

Activating Democracy: the I Wish to Say Project, Sheryl Oring, University of Chicago Press, 2016
Socially engaged art that engages non-art audiences, Oring's work continues to be an inspiration to us. Sheryl was also an artist involved with Booklyn, and as Local 917 Shop SO she is a current member of ILSSA.

Against Competition, Marc Fisher, Temporary Services, 2014.
An argument for art that is collaborative, participatory, and network-building.

A Guidebook of Alternative Nows, Amber Hickey (ed.), Journal of Aesthetics & Protest (JoAAP), 2012.
Art showing how the world ‘should be otherwise.’

Booklyn Education Manual, Booklyn, 2015.
Bridget and Emily (the ILSSA Co-Operators) contributed to the first version of this manual in the early 2000s.

The Craftsman, Richard Sennett, Yale University Press, 2008.
Craft: the desire to do a job well for its own sake, regardless of medium.

The Elementary Forms of the Religious Life, Emile Durkheim, 1915.
Collective effervescence. Bridget’s undergraduate degree was in Anthropology, and this foundation continues to inform ILSSA.

Group Work, Temporary Services, 2002
Quotes from wide-ranging sources on working together: some food for thought.

Parabola: The Magazine of Myth and Tradition: Solitude and Community, Rob Baker & Ellen Dooling Draper (eds.), 1992
ILSSA as providing community through individual solitude: or as we like to say: “working together, alone.”

Publishing in the Realm of Plant Fibers and Electrons, Temporary Services, 2014
Why publish on paper, now?

Rilke on Love and Other Difficulties, Rainer Maria Rilke, select writings 1892-1926
“Be patient toward all that is unsolved in your heart and try to love the questions themselves.” Love and friendship as providing opportunity for solitude.

Sentio, Adam Valentine Carr, 2017
A zine documenting an artist-made "speculative health wearable" "designed to counteract the effects of unfulfilling work." As ILSSA, one of our perennial questions is how can we build effective affective tools?

The Situationist Times, Jacqueline de Jong (ed. & dsgnr.), 1962-1967
The intersection of art, publishing, action, and the reactivation of everyday life.

The Social Organization of Work, Randy Hodson and Teresa A. Sullivan, Wadsworth Publishing, 1990, 2011
The sociology of work: foundational research for Surveying the State of the ILSSA Union.

In advance of each ILSSA Group Residency, participants are invited to share some of their favorite resources with the group. What tools do they find essential for living, working, making, being?

Art 21
Every time I watch, I get inspired. So many different ways of working and problem solving (and so many different problems to solve). So much to learn from others.
Local 646 Shop KL Katie Latona

Communism for Kids, Bini Adamczak, MIT Press, 2017
Especially the epilogue. My other tools here are oldies but this one is a recent read, and the parts I like especially have to do with the relationship between labor & capital, and here it's so clear that not-for-profit, co-ops, small/local businesses, etc. are totally not exempt from market forces and it makes me want to make sure the community organizations I work in do their best to design their structure to avoid labor exploitation.
Local 914 Shop ND Nike Desis

"The Empties," Jess Row, The New Yorker, 2014
Fiction is very important to me—to how I understand the world, my concept of truth; it has to do with being a woman; and the idea of ecstatic truth; fiction = art making; it's the validation of feelings are facts (or the inspiration of)... and there is so much fun stuff in the dept of fiction writing, and here is just one, a short story.
Local 914 Shop ND Nike Desis

Resistbot!
If you text "Resist" to 50409, it will prompt you to put in your name and address, and whatever message you write in there will be sent to your senators and congresspeople by fax. It's a quick way to be in direct touch with your reps and politically active when you don't have much time.
Local 646 Shop KL Katie Latona

Three Guineas, Virginia Woolf, Hogarth Press, 1938
This may not be for everyone but I am revisiting [it] to anchor me in these times.
Local 828 Shop ME Maria Epes

The bibliography below is compiled from members' submissions to the ILSSA Working Group Temporary Library at the first ILSSA Convergence (2013) and the ILSSA Reference Collection (2010). 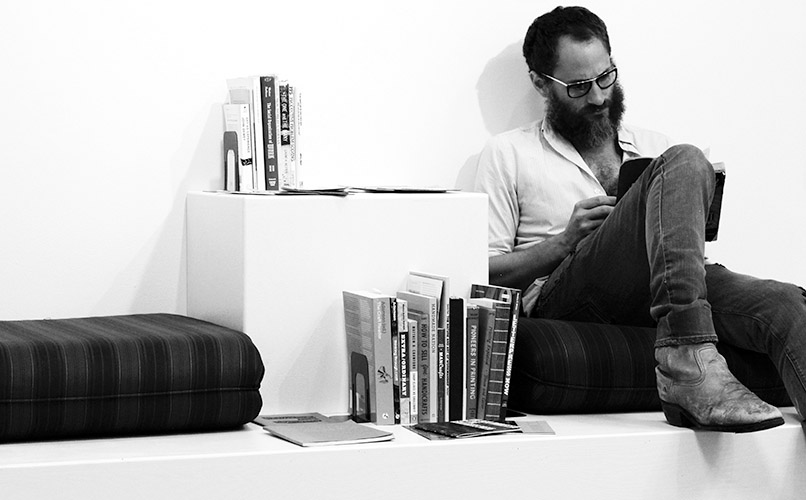